His return to Spain determines the next inflection in his creating trajectory. He has in his baggage all the ideas that he discovered and worked on in Paris, together with his Spanish “School”; in Spain he finds a very different artistic and pictorial context. Independent yet pervious, open and ready to evolve, once again, Sempere includes without doubting those aspects that he finds in the Spain of the 60s.

When I arrived in Spain, I discovered the great acceptance of the “Informalists” and I think that influenced me quite a lot. Let’s say that it contributed to smooth my earlier geometric schemes over.

And I returned to Spain where the new influences made me dizzy. It was a period of thinking over, to start again. In this period “El Paso” was disappearing. Since they hadn’t seen my stuff yet, it was incomprehensible for them. And I really didn’t do anything to imposing myself. I kept on working until they said: “That’s not too bad»

When I arrived in Madrid, there was a reverence towards everything around me. My paintings and this I had never forgotten, had to make a framework for all the tradition and continue it.

A mixture of feelings overcame me in Spain: my French formation, which was rationalist, and the conflict with the Spanish art from the museums. This produced a conflict, of difficult solution, inside me. I think that right now, my painting is a mixture of two directions: stiff schemes, and other less rigid elements to do with the colour and the concept of the piece.

I personally had a number of poses which operated in intuitive ways rather than conscious. Therefore, I was surprised myself by the execution. It was like embarking on an operation from which you never knew how it would exactly come out.

Sempere starts a new period for which he uses the panel as material support, influenced by the materials and textures used by the group El Paso. 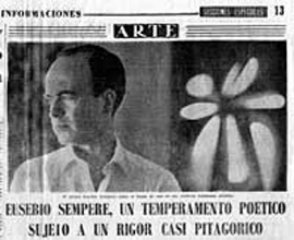 «In 1960, for the first time he uses wood as support, in order to give a stiffer base to the piece, nd to achieve a presence that the paper doesn’t have. He chooses the counter-plated for his bigger paintings, and later, the agglomerated board for more little ones, unique or component of diptychs or other combinations.
The adoption of wooden counter-plate as support obliges Sempere to look for a background which, up to then, he chose from a reduced range that somehow conditioned the result. The choice of the panel as support gives a broader range of possibilities to his paintings, and at the same time moves it away from that constant background given by the paper, even though he didn’t stop using it.
This new background problem makes him use new colour series, according to the chosen setting, since it will be important and determining in many paintings.»

I chose to work on panel because my fundamental instrument is the ruling pen. I also use the ruler.