Introducer of the Kinetic and Op-art in Spain 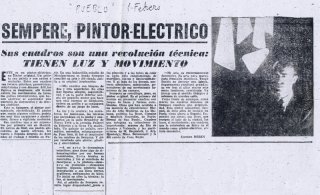 Spain during the 60s was closed to the outer world, due to the political and cultural context, which provoked very interesting artistic and cultural reactions as showed by the group El Paso or Parpalló. However, it wasn’t isolated from currents such as the European kinetic art. Sempere, lacking the insecurity and hesitation, and after spacing out from the kinetic norm, he took a little of that current to Spain, which started a way that is still valid today.
With this, Sempere had to do a didactic function; he had to “explain” what this current of new and totally unknown, or misunderstood, art was about.

The press from these years shows this situation and, in all of the interviews, the artistic current, this will occur all along the 60s and the 70s, and the fact of suddenly having to define himself as part of a label from which he was already far away seemed paradoxical.

My art was called “kinetic” since it has some cinematographic character for its changing forms. This is a very new technique and it was the result of incorporating new elements to the always evolving painting. Some painters have introduced sand, sackclothes and thread wefts to their oils. I included the technique: light and movement in them.

This fragment from an interview belongs to the paper “Pueblo”, from a 1st of February, the year is not specified, but it can be deduced that it belongs to his return to Spain and from his trip to USA in 1964. Sempere sent this bit of paper to his family.

To the question: What is “op-art”? Sempere answered, in a short interview from El Noticiero Universal:

A derivation from Mondrian, to give movement to the droop of Mondrian; it is this movement that creates visual effects.