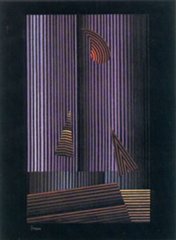 The alchemy produced by his classical formation, the years of investigation in Paris and the new influences from Spain bring out an absolutely personal art that confirms Sempere as an individual and different painter. This occurs due to the union of the most distant, cold and rigid technique to the closest and most known: to the nature as a model:
In this aspect, so important in the paintings by Sempere, has been worked on and gone deeply into, at the exposition: SEMPERE, PAISATGES (landscapes), organized by the “Joan March Foundation”, on the catalogue from which, Pablo Ramirez speaks about this moment:

Sempere seems to get over this strong crisis thanks to a clear thematic inclination. His return to Spain and his new house in Madrid allowed him to rediscover the Castellan landscapes and, towards 1962, he starts his first steps to take the landscapes to his paintings. The beginning of this new painting comes from an evolved series of watered paintings on bristol board, made in Madrid during his firs years, on which he developed screened zigzagging shapes, made of parallel lines painted in white on black. The series were based on the use of a same ascending or descending shape structures, sometime leading to the combination of both.
The structural and composing solution together with the vague allusion to rain or vegetable growing up, and to the benefit of the rain over the vegetables, seems to have been spurs enough as to allow the start of a new path. Sempere makes various versions inside this new topic-line, first using the bristol board as support and, after this, the ready wooden panel.
In these panels he considerably reduces the relief in the preparation, going back to the language that best dominated the precise graphic art sketched with watered painting and ruling pen, but not resigning in the chromatism to the poetic fate factor, that he was so interested in, giving his lines a different level of weight, in a double game that combines the ink’s intensity and the irregularity of the base.

I think that nature is the main theme in every piece: the painting comes out of the nature because we are deep inside it. And if there is a romantic shade on me, it’s because I must be this way. It’s probably a matter of character. I cannot betray myself.

Therefore Sempere started a new thematic line with the landscapes that he doesn’t intend to give up:

I still preserved the lines, but these were diluting, as can be appreciated on these landscapes. There are no more shapes, they are transformed into colour. I was influenced by the Spanish atmosphere, and the colour, and the landscape. My somehow emotional way of getting out these factors together was the panels and cardboards that have a landscaped glaze.