Cirilo Popovici says, about the group El Paso, founded by Saura in 1957:
«It is for sure that History will mention its existence as one of the critical moments in the Spanish art of our time. Some brief episodes, related to the members of the group in the words of Sempere, deserve some consideration:

In a trip around Madrid I met Miralles, and his art impressed me. I saw his monstrous “Brigitte Bardot” (the heir of the known “Venus from Cuenca”) in the study by Antonio Saura; there I also met Fernando Zobel.

Towards the 60s I went back to Spain. The most important group at the time was “El Paso”, a very significant group that appeared due to the Spanish post-war times. In my opinion, the group was more interesting as a group of characters than as a grouped character. Perhaps my view is influenced by my formation based on the French and American currents. I still believe, though, that the emergence of this group was very relevant. 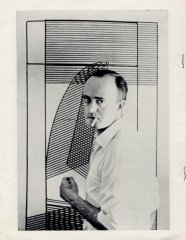 I was interested in the group; maybe because when I met it, it wasn’t as rigid as in its beginnings, the “informalism” was less rigid in general. In spite of this, I never thought of joining in, I didn’t have any desire of doing so. After the period of learning graphic arts and language in Paris I entered a phase of desire to introduce everything that was Iberian in my art. The group El Paso had managed to do so. But there was a reason why I couldn’t do it. I had always been away from it, isolated. Even with the group 57, which I could get to know well because they had a study in Paris, very close to my place, I could never work to specific levels in plastic materials. They painted their pieces together, each in a different corner, bit by bit. I think a painting has to be very personal. (…) with El Paso, my solitude deepened, if that was possible. When I arrived in Madrid, nobody was interested in my art, not even the artists themselves. I decided to continue on my own; it wasn’t really something new for me.

Pablo Ramírez describes the influence that this group had on Sempere’s paintings on the catalogue “Sempere Paisatges”:

«This new working technique, based on much less accurate graphic arts and conditioned by the application of the line on an abrupt wooden base, allowed him to give power to fate, but it created some hybrid sort of work that shows a great thematic incoherence: a series of very strongly textured boards which contained geometric games from screens composed by lines of dark earthy chromatism, and that even get to suggest some sort of self expression by means of the automatism. (…) most of these contradictory boards were destroyed in 1962, after their exhibition at various international collective expositions. Nevertheless, he probably managed to save a little group of them, maybe the less informal ones, which seem to suggest a very free and curious retro-artistic intention, Delfina,Virginia, Esperanza, etc.»