Then I decided that the path which seemed open for me was that of abstraction.

Towards 1953 I remember crying, really, when I had to say good bye to Figuration. As if I were going to go into a monastery. As if it were the farewell to one world, to forever go into another one. (Naturally the change comes after a long time of analysis). Very hard times began.

Sempere was entering unknown lands, he had to start from nothing, in a path where he didn’t have a base, just the instinct that that was the direction he wanted to go. 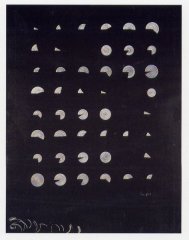 The terrible crash happened when I found one of the first pieces by Mondrian. None but his four friends knew it. And there came the drama…
…At the time I thought that Mondrian’s way could be a more serious one. Mondrian’s expositions were overwhelming. He was a man of large rectitude, a real mystic, and he dedicated his life to be like that, until death (…). His works were extraordinary for me. At my own risk I managed to assimilate it. But I still had the same problem. Mondrian had reached the summit and could not be followed. It was very hard for young painters to follow Mondrian’s path. On the other hand I didn’t have the strength to go through Figurative art. Thus I started by breaking down Mondrian’s schemes. After a few years I tried to introduce light, real light.