When I went to Paris I had just finished my Art studies, and my head was a mess. We were forbidden to look at modern art stamps. Here (in Spain) I could not see or touch what was going on, I could not see what Matisse meant and slowly assimilate it. How could I understand Modern Art, Cubism, Pointillism, and the American Informal Art. It was very difficult with the bad formation from the School of Art.

And so the story begins. The works of Kandinsky, Braque’s, Juan Gris’s…The ‘discoveries’ and the elaboration of the kid who is standing. More than anything else it was a matter of watching and meeting people.
Sempere. 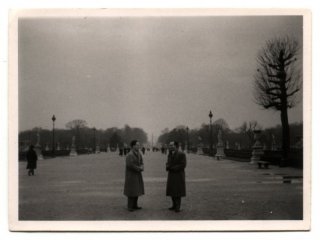 Impressed and flooded by the variety and richness of tendencies, Sempere leaves himself open to all that had been forbidden at the School; and he learns from the masters that led the creative currents at the moment. It is his own revolution, , the moment of receiving new ideas, his needed opening and expansion before starting a more deep and own search. Sempere paints cubist still lives, murals on walls, discovers the world of geometry; he tries new materials…

I copied Braque, Matisse and Klee. After that I got into Mondrian and Kandisnky.

When I arrived, the cenacles hardly existed. They were spread, each looking for his own place. There were only a few masters left, including Braque. We visited them troubled of disturbing them. And then we realised that they were a lot more humble than we thought…We were all starting a completely new art, searching…

You know I destroyed the whole work, probably because there was too much Kandinsky, Matisse, Braque and I didn’t agree with all that mess. I’d like to have kept them, possibly to destroy them again, but I’d have known what it was that worried me then…, after this I was scared to take my stuff to the galleries.