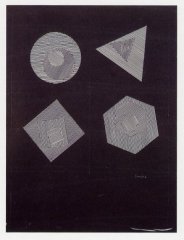 Sempere discovered the inner structure of everything in Geometry, therefore it was something “natural”, and at the same time the models of the large diversity of forms that men can imagine; there is nothing outside of it. With it, Sempere chooses the order, the coherence, the tidiness… 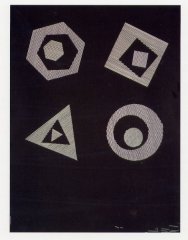 It can’t be denied, as he states, Kandinsky’s influence in his process:
A vertical line that joines with a horizontal one creates an almost dramatic resonance. Actually, the contact between the acute angle of a triangle with a circle doesn’t produce a lesser effect than the contact of God’s finger with Adam’s finger in Miguel Angelo’s piece»
Kandinsky: “The Spiritual within Art”.

As Sempere admits in Josep Melia’s book about him (Edited by Poligrafa, 1976):

Klee was my first great discovery, after him, Mondrian overwhelmed me. But I think that it wasn’t until 1953, when I became immersed in Kandinsky’s work, that I discovered my true path.

Years later, when he returned to Spain, and he had to «explain» his paintings, he declared:

The Figurative concept is very complex, since it refers to all the objects in the nature that surrounds us. And a circle or a rectangle are also elements of the surrounding reality.

Therefore, Geometry reflected the highest level of abstraction, of essence, of the idea that can be extracted from the phenomenon:

The geometric forms are the best way to get a spirit of serenity and the vision of the eternal.

Geometric art is an answer to our way of life. In Paris, Informal Art became fashionable, but it didn’t really interest me. I started this more difficult way, trying to structure all those undone forms.