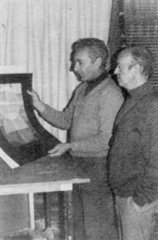 In 1955, thanks to Loló Sodevilla, Sempere met Winifredo Arcay, Cuban painter and serigraphist, who worked for the emblematic Denise René Gallery. Arcay proposed Sempere to work with him and this way learn the serigraphy techniques. It was a privileged opportunity to meet other artists. During those years, Sempere was able to reproduce Vassarely, Mortensen, Arp and Bloc.

«Every morning he went to Arcay’s studio, who lived in the outskirts of Paris, by train. In the beginning he only prepared the colours, after that he began to make the models, the negatives or even retouch those serigraphies that came out faulty. Each day he learnt something new from Arcay. He carefully listened to his explanations and as the advantaged pupil he was, very soon he discovered the secrets to the technique, matter on which he is today (1982) a master.»
…«the necessary tools for serigraphy are a plain table with no lumps of any kind, since those would appear on the printing paper. It is also necessary an embroidery frame to hold the silk or nylon, using either material depending on the quantity of ink one wants to go through (nylon lets less ink through, and is what Sempere used for his serigraphies of thin lines).
On top of the silk or the nylon, and using a very little warmed up iron, a special paper, composed of two sheets, is stuck; on the upper face the painting to be printed is made, and with a sharp blade we cut the drawing, uncovering the lower sheet which is very thin, this way we obtain the negative. The sheet to printed is put underneath the embroidery frame. We have to cover the margin thoroughly, so that the ink doesn’t taint them, then we spread the ink with a scraper, trying to always use the same pressure and no more than necessary, since this would spoil the negative, and also to get the same intensity all the time.
If it’s a colour serigraphy, just one spreading with the scrapper is needed, but if more than one colour is used, then it will be necessary to go through it as many times as the number of colours, and to get just the part of the drawing that we want to print out, then we need to meticulously cover the parts that go in a different colour.
In every change of colour, we need to clean the frame so that there are no rests of previous inks.»

Years later, when he returned to Spain with Abel Martín, he introduced the serigraphy technique in this country.