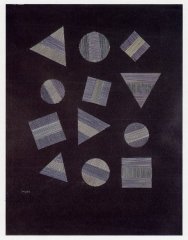 The experts consider his works from these years – 1953-1958 – as Sempere’s truly kinetic stage. Kinetic Art was arising at the time throughout Europe, and Paris was one of its alchemy workshops. The Denise René Gallery had a fundamental role at the beginning, grouping together characters like Vassarely, Soto, Mortensen… Kinetic Art was not completely defined yet; its base was geometry and a trend to movement.

There was an exposition at the Denise René where I wasn’t included. When somebody is having problems, nobody pays attention to him. How were they going to pay it to me with those little papers! They wanted large paintings. It’s logical. They used to expose only one of my gouaches, something of very little importance if you look at its size. That’s why I thought that the only way to go on were the luminous relieves. It was a more finished piece, corporally more important. It didn’t really work out because its conclusion wasn’t a good one. A somehow rudimentary box with a few bulbs.

The kinetic current provided him with a platform, a base for constructing, an Ariadna’s thread to go into the labyrinth of a personal investigation.
Sempere painted circles, triangles and squares almost as if it were lab work:

They were circles, squares… On the first place because I didn’t have the means. I spent years with the known piece of paper – from the next door’s bin – drawing circles on it… Confidence in circles? I must have it, because, to spend all my life on them…

Later he filled those circles and squares with lines:

Lines were an element of language for me, in the beginning they were new and slow, vocabulary that lasted for years, the years that I spent in Paris. 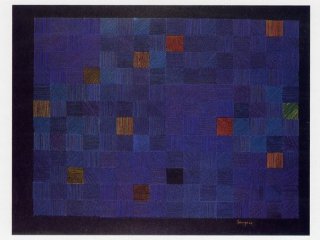 Just as Antonio Fernández describes in The Work of Eusebio Sempere from a Visual Investigation of Painting (Universidad Complutense of Madrid, 1989), the radical change he had started also implied a technical change that consisted of a change from vertical to horizontal drawing, on top of a table, due to the use of the compass and the ruling pen.

In 1956 Sempere goes a step forward by superposing the lines within the geometric patterns, this opens a new stage in his painting, which consists on creating different visual levels in his gouaches. This new technique will be obvious in 1958, when this circle of experimentation is closed.