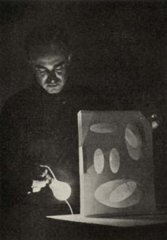 Sempere’s work during 1953 to 1959 had two aspects that would still go on for some time: the Gouaches and the Luminous Relieves. With the latter he started something of his own and new to the plastic expression that tied him to the element of light, a constant element that he would never let go.

Sempere published a manifesto, in Paris, to do with the exposition held at the Modern Art Museum of the city; remember his desire to bring new elements to modern plastic art.

Yes, I brought the element of changing light to kinetic art, which had not yet been used.

Together with Loló Soldevilla, his partner at the time, he wrote this manifesto, which he distributed during the inauguration of the <"Realitées Nouvelles” exposition that same year. Polemic didn’t stay out of this. Later, Vassarely expressed that it was a recreation on the notes from his own manifesto. 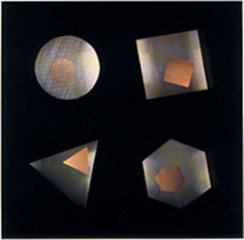 The truth is I never knew of the existence of those notes, I never read them. I think if he read this he’d be angry with me, but the isolation I lived in made it impossible for Vassarely’s manifesto to reach me. The exposition was about my first luminous moving relieves that had nothing to do with him.