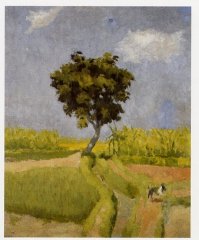 Eusebio Sempere gets into the Crafts School in 1940, after one year studying at the Cabanilles Academy; almost simultaneously he starts his Art studies at the School of San Carlos in Valencia, he finished his studies in 1946. It’s the time of the inevitable academic norm, the time of the classical models imposed by the school in Valencia, who considered Sorolla as the only pictorial paradigm.

The memory of this stage of his life was not that of a pleasant and enriching time, on the contrary, he always manifested rejection and displeasure towards the remembrance of these years.

The years assisting to the School were monotonous and very little fruitful, due to the annoying obligation of being subject to all the badly guided disciplines and even worse assimilated. During those years, reproductions of the Impressionism and Cubist art used to go all around the School, with the natural confusion in the teachers: – “that’s poison”- They used to say.
Sempere. Cirilo Popovici Dirección General de Bellas Artes, 1972.

My staying at the School of San Carlos was despairing. The time there was a total waste. “Blue is used this way, you can’t put red, and you can’t put such thing…” And in this way you spent the years. But I had to continue my cours to show my family that I was serious about being painter.”
“…Academically, the models to follow were a copper pot, a skull and a curtain behind them. I mean it as the most “un-paintable” thing. 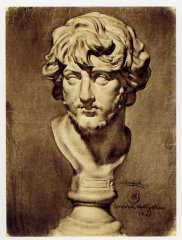 Years later he was more categorical in the book by Josep Meliá, edited in 1976: “Everything was crap, write it down don’t forget to say it”.
He himself destroyed most of his works and drawings from this period.

Someone at the school seemed to give him a different view about painting; it was Father Roig, the Religion teacher in Art, who tried to offer another alternative to his students, showing them the works by artists such as Kandinsky, Matisse or Le Corbussier. Their friendship grew stronger-varying in intensity- until the death of the teacher.

The person, who influenced us the most, at the School, was a priest who taught religion. Instead of talking about religious topics, he spoke of modern art. He was Father Roig.